The Playbook From Barney 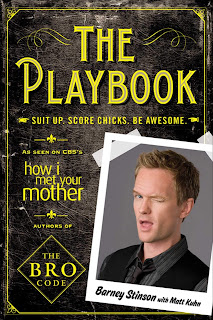 Barney- I saw some guys slip something in there.

Barney - that guy ( pointing someone )

And the game is done

She - we have been assigned a new house mom I'd

And here the games starts

now select your target preferably a

girl with a real nice phone and...

then as soon as you're gone

she gets out her phone and does an

Matterhorn a series of fake websites all

devoted to the incredible life of

Lorenzo von Matterhorn.Leave her some minutes

to check and then come back

Barney - can I buy you a cup of coffee

and the game is on

Barney - I am the bass player for cheap trick

First try She - what are you talking about

She cries and search for confort and you will be there

Barney -  I got left at the altar

She will fill bad for you and will try to confort

The game is on

8 – The My Penis Grants Wishes

She – Really a genie comes out of it

Barney - it only if you rub it hard enough

And the game is on

angry she steals the playbook

step 3 put on the scuba suit and tell her

you're going to do one more scam called

the scuba diver on the hot girl standing

step 4 Your female friend will tell everthing to

step 6 You after take off the mask,

give them some feel about your

really exist because let's face it

step 7 feeling bad for you your female friend

talks you up to the girl who then agrees

to go get coffee with you and it is on

step 1 admit to yourself that

you still have feelings for this girl

moment to make a drunken move after

hanging out at a strip club .

step 3 agree that you two don't work locking the door

on any future you could have .

world and ask for her help

Step 5 explain everything to Patrice and hope she

Step 6 pretend to be dating

breaks into your place to find the

playbook and show it to patris

Step 7 after Patrice finds the playbook have your

Step 8 prove your loyalty to Patrice by burning the playbook

And actually burn it.

you don't need it anymore

Step 9 because your friends have no boundaries they'll

inevitably have an intervention for Robin

Step 10 Tell only Ted about your plan to

propose to Patrice wait and see if Ted

tells Robin and if he does it means your best bro

in the world has let go of Robin and has

given you his blessing.

Step 11 Robin arrives at her favorite spot in

the city and finds the secret final page

of the playbook the last play you'll ever run

Barney - turn it over

Step 2 Put it where everyone can see

Step 3 Stand by it

The game is done

and that I'd recognize her because she'd be the

most beautiful girl in this bar

She - I am definitely not Lisa but I would be happy

to help you find her

She - are you all right

Ted -  tomorrow I'm donating a kidney to my

just wanted to grab one last drink in

case you know I don't make it

She - you are so brave

Ted - hey listen before I give my best

friend this organ how about I give you a

Where as in the 80s classic I magically come to life

I wait till a girl mentioned something she likes

She - I love nachos

Barney - thank you allow me to

introduce myself my name is Jim Jim

nacho inventor of the nacho

You can watch al the plays in this PlayBook

And that’s all folks .

Barney Stinson and investing Barney was really a bad investor. Every one thought that he was rich becouse he knew how to invest but after season 3 episode , we discovered the hard truth. Barney Stinson invested in bimbos , he went to the gym and cheered all the nice but at the time fat girls. He kept tracking of all the progress of the girls. And when the time arrived and they become nice and fit the first person that they thanked was Barney. We have to admit ,he can see further than many of us. He was a genius ,he could prepare complicated plans just to achieve his objective.He could waited for years and never let go. Why Barney was rich and how much rich he was In season 2 episodes where the group went to Atlantic city so Marshal and Lilly get married for 1 second , we can hear that Barney had a serious game problem .  He had lost all his money a life time saving as he sad.He had lost 80 thousand dollars. So all his life time saving was 80 thousand. With all the money he got from his
Post a Comment
Read more

There are 2 versions of this story  The story that all you know : Himym : The tie is originally worn by Marshall, but after making fun of it, Barney ends up  having to wear the ducky tie as a result of losing a bet with Marshall and Lily . ... According to the bet Barney has to wear it for a whole year, but in Disaster Averted, he tries to get out of wearing it for the rest of the year . It is even seen wrapped around Barney's arm in  The Slutty Pumpkin Returns ​​, when Barney turns up almost naked in the Halloween Party on the roof of  The Apartment . It was first seen in the following episode during a flashforward of Marshall  and  Barney 's trip to Atlantic City As indicated by the bet Barney needs to wear it for an entire year, however in Disaster Averted, he attempts to escape wearing it for the remainder of the year. He even offers Marshall a ton of money in the event that he allows him to take it off. It just so happens, Barney needs to take it off in light of the fact
Post a Comment
Read more

Throughout the series, Barney   refuses to mention what he does for a living, disregarding any questions about his job with a dismissive "Please." Barney is apparently quite rich, He lives in an upscale house he calls the fort of Barnitude, located at a hundred on an unspecified road, and is wealthy enough to own  300 inch televisions shipped from Japan as wel